Tom’s Food Markets have served three generations in the Grand Traverse area. Now, they are making possible a special place in the new Interlochen Public Library to serve future generations. A $250,000 gift will enable the new library to realize its vision of a 1,150 square-foot children’s room with a floor to ceiling glass wall. “It provides a visual connection, but gives children their own space,” explained John Dancer of Cornerstone Architects. “Everything in the room is kid-scaled, including lower windows so children can easily see outside. It is a room designed to let kids to be kids.” 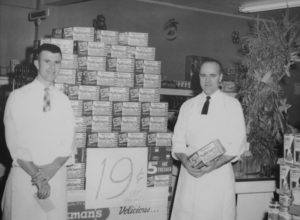 Dan Deering (left) with his father and Tom’s founder Tom Deering in 1958 at the original Tom’s store at 11th and Maple in Traverse City. Dan, along with daughters Christy and Jane, has continued his father’s tradition of giving back to the communities where they do business.

Children’s programming has blossomed at the library as younger families move to the area. “This will allow us to expand what we offer to kids of all ages,” said Library Director Renee Kelchak. “They can have an interactive experience or watch a movie without interrupting other patrons.”

In April, Tom’s Food Markets celebrated its 70th Anniversary. A northern Michigan native, founder Tom Deering opened his first store, Deering’s Market, in 1946 at the corner of 11th and Maple in Traverse City’s Central Neighborhood. Now, there are six stores in the Tom’s Food Market chain with 300 year-round employees.

The business remains family owned and managed. The founder’s son, Dan Deering serves as CEO and, at age 82, still keeps a hand in the business. His daughters Christy Kuhnke, President, and Jane Deering, Corporate Director, are actively involved in company operations.

Since its inception, the grocery store has made it a point to give back to the communities where they do business. “My sister and I are committed to carrying on the tradition of giving started by our grandfather and father,” said Kuhnke.

The most recent Tom’s store was built in Interlochen in 2009 on a 38-acre parcel designated by Green Lake Township’s master plan for further development as “Interlochen Marketplace.” “This area has a lot of potential.” Kuhnke said, “The new library and the community’s support demonstrates the future vision for Interlochen is beginning to take shape.”